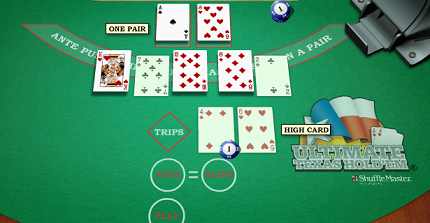 Ultimate Texas Hold’em is a single-player poker variant against a computer dealer available at Amaya casinos online through its poker partnership with Bally, the original developer of the title. The number of cards dealt and the ranking of winning hands are the same as those in standard Texas Hold’em Poker, but the Ultimate Texas Hold’em betting options and rules are a bit more complex.

Ultimate Texas Hold’em is played on one 52-card deck, and requires the player to make equal Ante and Blind bets to be dealt in. Players also have the option of a bonus Trips bet. Blind and Trips bets are paid according to two bonus pay tables, so the compulsory Blind bet means the chance at big wins on every hand. The player can also raise the Ante bet by up to 4X its value during play.

Players can make Ultimate Texas Hold’em Ante and Blind bets of between 5.00 and 250.00 in the currency being used, and Trips bets from 1.00 to 25.00. Once these bets are placed, player and dealer are each dealt two cards, plus five community cards face down. Players check their hole cards and decide whether to check or make a Play bet, of 3X or 4X the Ante. If the player bets, they may not raise again.

The flop cards are then turned over, and if the player checked, they can now make a Play bet of 2X the Ante, and again, cannot raise any more. The two river cards are then revealed, and if the player has checked twice, they must either bet 1X the Ante at this point, or fold, losing both Ante and Blind bets. Hands are then compared, with the winner the hand that can make the best poker combination using any mixture of pool cards and their hole cards.

If the dealer opens and wins the hand, the player loses all three bets. Likewise, if the dealer opens and the player’s hand is strongest, the player wins all three. Ante and Play wins pay even money, while Blind bet wins are paid according to the Blind pay table. Blind bets are pushed for anything less than a straight, even if the player wins. Straights pay 1 to 1, with prizes increasing exponentially until a royal flush wins the game’s top prize, 500 to 1.