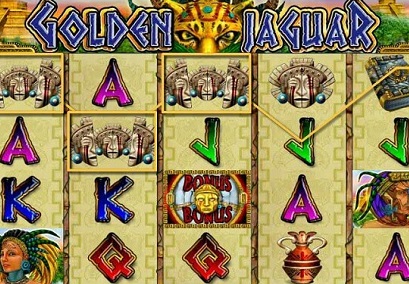 The Golden Jaguar slot game is a creation of Cryptologic. It features a theme based around, as the name suggests, a fearsome large feline, who seems bent on slashing anyone who gets in his way with a paw full of claws. Don’t think he isn’t good luck, however, as matching the discontented cat is the fastest way to get major payouts. In terms of visual fidelity the Golden Jaguar slot game is done fairly well, although the graphics are looking a little dated. This can be forgiven, however, being that the game is a few years old.

The soundtrack is also starting to show its age, but the quick beat of drums that accompany each spin of the reels still does a good job of getting up the excitement levels. In terms of game play the Golden Jaguar slot game uses a five reel, fifty play line system, with an option given that allows the player to manually adjust play lines. This can be done quickly and easily via the interface seen at the bottom of the screen, and the intuitive functionality is certainly a feather in the cap of the developers. Let’s have a closer look at some of the more interesting features of the game.

The already mentioned large cat is the wild symbol in the game, and will be discussed later. The standard symbols are what we’ll have a look at now, including the two most valuable in the game, a tribal chief and his queen. The pair seems to be the leaders of a Mayan tribe, which makes sense given that the jaguar was considered sacred to these ancient people.

The chief and his queen offer immense payouts if matched a maximum of five times. The next most valuable symbol in the game is a pair of tribal masks, one seeming to be of a lizard, and the other a primate. The two masks are followed by what appears to be a book of spells, which doesn’t exactly fit the theme, but remains a fairly valuable medium level symbol.

The last picture symbol is a clay urn, which gives only a modest payout upon matching. The remaining symbols are the traditional ten, jack, queen, king and ace of playing cards, which grant only minor payments in online real money slots Canada.

The big cat in the Golden Jaguar slot game will always make his presence known, snarling angrily and slashing at the player upon being matched. Note that he is a stacked symbol, meaning that he appears on three or more spaces at a time. This, naturally, makes him essential for creating matching sequences, and there is hardly a time the jaguar appears on the reels that he does not result in a payout.

Note that the jaguar may not match with the scatter symbol, which appears as golden tribal mask. Upon being matched the scatter symbol grants seven free spins, which will play out automatically. As in various other pokies available on internet these days, during the free spins, however, a random multiplier is awarded, which multiplies each win by the specified amount.