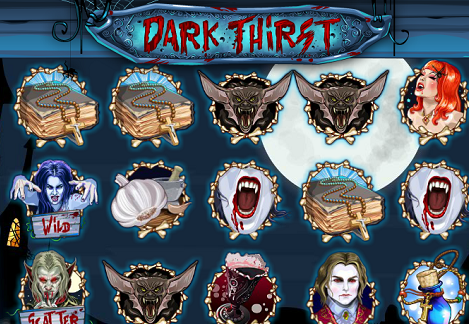 Surely one of the most popular themes for online video slots is the horror genre – whether it’s ghouls, goblins, vampires, ghosts, gremlins, zombies, or all of them together, players apparently can’t get enough of this stuff.

The Dark Thirst slot is one such game that draws its inspiration from a combination of 80s and 90s vampire films and the 18th Century gothic novel. As such, the Dark Thirst slot features a fearsome band of fiends including a yellow-eyed vampire bat, cadaverous lady vamp, Dracula with blood dripping from his mouth, and a handsome “younger” vampire bearing a striking resemblance to Tom Cruise in the 1994 cult film classic, “Interview with the Vampire”.

Other theme-appropriate symbols in the five-reel 20-payline Dark Thirst slot include garlic, a vial of holy water, a bible and crucifix, and a chalice filled with blood. Refreshingly, the Dark Thirst slot has done away with the usual playing card symbols to stay completely true to the theme.

Your money or your life… well, not quite. The Dark Thirst slot requires a very low minimum wager of only 0.05 credits. But fortune does favour the bold so more adventurous players may bet up to 270.00 credits per spin. Up for grabs is the Dark Thirst slot jackpot of 7500 times the wager.

The grisly blue-skinned lamia – bet you didn’t know that was the name for a female vampire – is the wild symbol in the Dark Thirst online slots. This means that she can stand in for any other symbol, with the exception of the bonus and scatter symbols, to complete winning combinations.

Not so scary after all…

The aforementioned corpse-like, bloody-faced Dracula is the Dark Thirst slot scatter symbol and he awards free spins whenever three or more of him appear anywhere on the reels.

Although – opposite to some mobile-friendly slots – no multiplier is applied to wins from Dark Thirst slot free spins, they can be retriggered. This considerably increases players’ chances of landing a gratis win off a free spin.

Go to Your Grave for the Bonus Feature

Dark Thirst slots players will then be taken to a shadowy graveyard, where they will have to select tombstones to reveal cash prizes. They can keep on selecting tombstones until the monstrous creature they dig up is a skeleton. At this point, they will be returned to the main Dark Thirst slot game and their bonus winnings will be added to their existing total.